Sorting of Sperms based on DNA damage made possible by Microfluidics Sperm Sorting Technology: 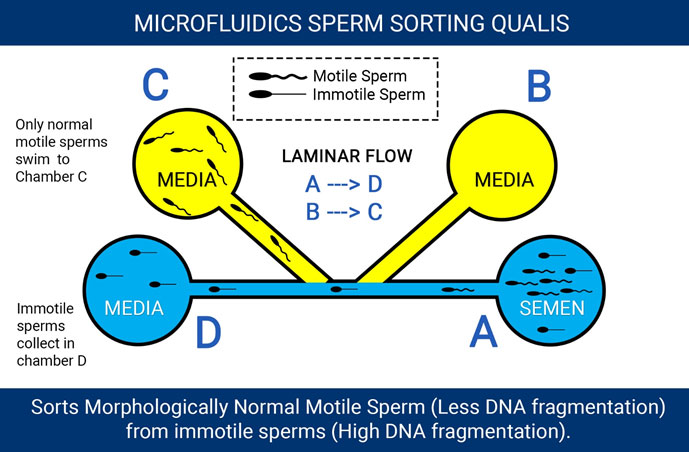 Why is Microfluidic sperm sorting Test recommended for IVF?

While the natural method of conception has an evolutionary advantage of screening damaged Sperms from normal sperms, IVF doesn’t have that advantage.

Human body has a way of screening out sperms with high DNA damage and preventing them from reaching the egg and passing on the damaged DNA to the embryo. This mechanism allows only the best sperm to reach the egg. A test tube baby however is created in a petri- dish, where the eggs and sperms are collected from the couple and just mixed up in a Petri-plate allowing fertilization to take place. This technique by passes the natural selection mechanism of human body making it equally likely for DNA damaged sperms to fertilize the egg. In such a case the embryos would be of poor quality.

Although ICSI, a widely used advanced IVF tool can help select morphologically normal embryos from abnormal sperms, it doesn’t screen for DNA damage. MSSQ however is rapidly gaining favour with IVF laboratories because it can sort immotile sperms from motile sperms there by giving them a way of screening DNA damage in sperms. As it has been established1 that sperms with higher DNA damage index are poor swimmers.

Therefore, separating motile sperms using the Microfluidics Sperm Sorter and using this sample of highly motile sperms to fertilize the eggs, reduces the risk of passing on Sperm DNA damage or effecting the quality of embryo.