What are Chromosomes? What kind of abnormality can they have? 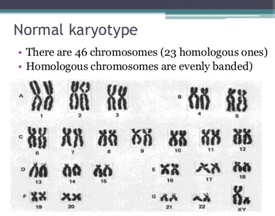 DNA is the blueprint of life. DNA carries in it small units called the genes which are the heritable blocks of life. The DNA in each individual is packaged into thread like structures inside each of our cells. These structures in which the DNA is packaged into are called “Chromosomes”. For each species there is a unique number of chromosomes. In humans this number is 46. Out of the 46 chromosomes there are two which determine the sex of the organism and are named as X and Y. These are called the sex chromosomes. A person who inherits XX would be a female while a XY individual is would be male. Rest 44 chromosomes are called the autosomes. Each of the chromosomes has a sister copy which is its exact duplicate. Thus, there are 22 pairs of autosomes in addition to a pair of sex chromosome. Each of the chromosome and its duplicate copy are identified by a unique number from 1 to 22. Each of the 22 pairs of autosomes and 1 pair of sex chromosomes have their own features and characteristics. Their unique structure and character makes them be identified separately. Thus, we have 22 pairs of autosome along with X and Y chromosome. This makes 24 unique chromosomes in the human cell. Hence the screening technique used in preimplantation genetic screening (PGS) gets its name as "24 Chromosome screening array".
Any alteration in the number or structure of the chromosome is termed as “Chromosomal abnormality or abberrations”.

Some of the common aneuploidy that produces viable embryos with syndromic children is:

Other chromosomes can have extra or missing copies as well. Such abnormalities are rare and most often don’t create a viable embryo.

What is pre-implantation genetic screening (PGS)?

IVF /ICSI in patients results in a number of fertilized embryos. Although, the good embryos are chosen on basis of morphology, the implantation rates and subsequent pregnancy are not as high as you would expect. This is because embryos can have chromosomal anomalies or could be mosaics. Mosacism means that the embryo might harbour two type of cell population where one is normal and the other has some chromosomal abnormality. Low level mosaics are considered viable, however high level mosaics would look normal by physiology but fail when implanted.
Knowledge about the aberration (structural or numerical) in the embryo would thus significantly increase the probability to implant a good embryo. In Preimplantation Genetic Screening (PGS), an aneuploidy screening of the embryo is performed. The embryo is probed for each of the 24 chromosome with the help of the unique probes or control chromosomes. This helps in determining any gross numerical aberrations that a morphologically healthy looking embryo might acquire. Thus, by PGS the care provider can choose a better embryo over the bad ones with respect to aneuploidy thereby decreasing the chance of an implantation failure.
PGS ensures that certain genetic diseases due to numerical aberration of the chromosome like Down’s Syndrome can be avoided.

Is PGS for me?

How does PGS work?

The procedure for PGS is likely to be as follows:

Possible variations to this procedure

Testing at five – six days
It is possible that instead of removing and testing one or two cells from a two – three day old embryo, some centres may allow the embryo to develop to five - six days, when there are 100-150 cells. More cells can be removed at this stage without compromising the viability of the embryo, possibly leading to a more accurate test.

A small number of clinics are now using a procedure called comparative genomic hybridisation (CGH) which allows centres to test for abnormalities in all 24 chromosomes. Comparative genome hybridization involves screening the unique regions of each chromosome with numerous unique chromosome specific markers and compared with a standard set of chromosomes probes. In this process fluorescent probes are used to screen the 24 chromosomes. Any difference or deviation in chromosomal content from the standard or control would be detected by change in the fluorescence intensity. The use of so many probes increases the resolution or chance to detect an anomaly if present. This array used is known as 24 sure. PGS testing with array CGH is 98-99% accurate.

Is it better to test at day 3 stage or day 5 stage?

It has been conclusively proved that testing at Day 5 is better since the embryos are thought to be better if they survive till day 5. Also the problems with embryo mosaicism (see below) are lesser on day 5. Lastly chances of damage to the embryonic cells are minimal on day 5.
However most clinics are not able to employ day 5 testing since it requires:

What method of testing is better for embryos, FISH or aCGH?

aCGH is now widely used for preimplantation genetic screening (PGS) to detect gross abnormalities in the number or structure of chromosomes in an egg or an embryo.
With CGH, a sample taken from an egg (the oocyte polar body) or a single cell of a blastocyst stage embryo is compared to a normal control or standard set of probes. Deviation in the DNA content due to chromosomal abnormality would be reflected in the fluorescent intensity. The currently used 24 sure aCGH is based on “microarray” techniques, thus increasing the probability of anomaly detection than the “standard” PGS. PGS testing with array CGH is 98-99% accurate.
Standard PGS uses techniques known as fluorescence in situ hybridisation (FISH). In this techniques fluorescent probes for chromosomes X, Y , 7, 13, 15, 16 ,18, 21and 22 are used to hybridize with the chromosomes in embryo. The probes are designed from a certain specific region of the chromosomes and the entire length of the choromosomes is not covered. Moreover, this method limits the use of 5 chromosomal probes for one slide due to limitation in the capacity of the scanning microscope to detect signals. Thus, FISH has lower resolution or power to detect a chromosome as the probes are designed from a specific region. Moreover it is limited to a number of 12 chromosome probes and hence do not screen for all the 24 as in case of aCGH.

What is my chance of having a baby with PGS?

Chromosomal abnormalities in the embryo are the most frequent cause of recurrent early miscarriages and recurrent implantation failure in IVF despite transfer of best quality embryos morphologically.
It is said that even if the eggs are sperms are taken from normal healthy young couples, almost 40% of embryos will be genetically abnormal. If the woman is older, has bad quality eggs or if the man has poor sperm quality, 60-90% of the embryos may be abnormal.
The miscarriage rates has been shown to drop from 33.5% to about 6.9% in studies while the IVF success rates been shown to increase from 40% to about 60% when the above technique is employed.

What are the risks of PGS?

Some of the risks involved in PGS treatment are similar to those for conventional IVF. Some other problems unique to PGS treatment include:
• Some embryos may be damaged by the process of cell removal
• Possibility that no embryos are suitable for transfer to the womb after PGS.
It is important to understand that there is no guarantee against a miscarriage occurring even though PGS has been carried out prior to embryo transfer.
Mosaic Embryos
PGS relies on the theory that all the cells in a human embryo are chromosomally identical, so that if you examine one cell from an embryo, it will show whether or not all the other cells have a chromosomal abnormality.
However, research has shown that in some embryos (known as mosaic embryos), the cells are not chromosomally identical. As a result, many such embryos will be discarded that are in fact capable of producing a normal pregnancy.