What is IVF or the test-tube baby technique?

Test-tube baby treatment is the popular name for in vitro fertilization, usually shortened to IVF. It is the process by which egg and sperm are mixed outside the body and then returned to the uterus after fertilization. It involves the removal of an egg from the woman’s ovary, the collection and purification of sperm from her partner, the mixing of sperm and egg in laboratory and, if fertilization occurs, the insertion of the developing fertilised egg – the embryo – into the uterus. The embryo, still quite invisible to the naked eye, is placed in its mother’s uterus usually two days after fertilisation, while it still consists of only a few cells and long before any organs have formed.

When should IVF be considered?

The main situations when IVF may be worth considering are:

1. Testing a couple’s suitability before treatment

Preliminary preparation for an ART procedure may be as important as the procedure itself.

2. Choosing the correct method of down regulation

For this purpose an injection is started usually in the previous cycle (d21) or sometimes even in the same cycle. At a particular time, (usually d2) blood levels of estradiol (e2) and lh are tested to confirm the down regulation before starting stimulation. Mainly used for patients with endometriosis. It causes greater suppression of own hormones requiring higher dose of injections to be given from outside. greater chances of OHSS.

In this protocol, used for most patients nowadays (in our clinic more than 90% patients are on this protocol), the body's own hormones are not suppressed in the beginning of the cycle. This leads to lower amount of drugs needed and thus lower costs. This is good for patients who have low ovarian reserve and for those having PCOS. Later during the cycle, antagonist injections are used to lower the body's internal hormones.

The best chance of successful pregnancy is obtained when more than one embryo is placed in the uterus at the same time. This is because so many early human embryos, normally fertilised, are lost or do not develop into babies. Consequently, one way of overcoming this natural loss is to put back several embryos simultaneously during IVF. During ovarian stimulation, also known as ovulation induction, ovulation drugs, or "fertility drugs", are used to stimulate the ovaries to produce multiple eggs rather than the single egg that normally develops each month. Multiple eggs are needed because some eggs will not fertilize or develop normally after egg retrieval. Drug type and dosage vary depending on the program and the patient. Most often, ovulation drugs are given over a period of 9 to 11 days. Ovulation drugs include human menopausal gonadotrophins (hmg), follicle stimulating hormone (fsh), recombinant fsh and lh, and human chorionic gonadotrophin (HCG). Gonadotropin releasing hormone (gnrh) agonists or gnrh antagonists are used in conjunction with these medications to prevent premature ovulation.

4. Assessing the development of the eggs

Egg collection is generally timed to within a few hours of when the woman is expected to ovulate. If eggs are not collected very close to this time, they may not fertilise properly. This is the main reason why so many tests are often done to confirm the status of the woman’s hormones and, thus, development of her eggs.

Using ultrasound examinations and blood testing, the physician can determine when the follicles are appropriate for egg retrieval. Generally, 8 to 14 days of fsh and/or hmg injections are required.

When the ovaries are ready, HCG or other medications are given. The HCG replaces the woman’s natural lh surge and helps the eggs to mature so they may be capable of being fertilized. The eggs are retrieved before ovulation occurs, usually 34 to 36 hours after the HCG injection is given. However, 10% to 20% of cycles are cancelled prior to the HCG injection.

Egg retrieval is usually accomplished by transvaginal ultrasound aspiration, a minor surgical procedure. Some form of anaesthesia is generally administered. An ultrasound probe is inserted into the vagina to identify the mature follicles, and a needle is guided through the vagina and into the follicles. The eggs are aspirated (removed) from the follicles through the needle connected to a suction device. The egg retrieval is usually completed within 10 minutes. Some women experience cramping on the day of the retrieval, but this sensation usually subsides by the next day. Feelings of fullness and/or pressure may last for several weeks following the procedure because the ovaries remain enlarged. 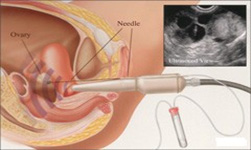 After the eggs are retrieved, they are examined in the laboratory. The best quality, mature eggs are placed in IVF culture medium and transferred to an incubator to await fertilization by the sperm. Sperm, obtained by ejaculation or a special condom used during intercourse, are separated from the semen in a process known as sperm preparation. Motile sperm are then placed together with the eggs, in a process called insemination, and stored in an incubator. Fertilization occurs in the laboratory when the sperm cell penetrates the egg, usually within hours after insemination.

Visualization of two pronuclei the following day confirms fertilisation of the egg. One pronuclei is derived from the egg and one from the sperm. Approximately 40% to 70% of the mature eggs will fertilize after insemination or ICSI. Lower rates may occur if the sperm and/or egg quality are poor. Occasionally, fertilization does not occur at all. Two days after the egg retrieval, the fertilized egg has divided to become a 2-to 4-cell embryo. By the third day, the embryo will contain approximately six to 10 cells. By the fifth day, a fluid cavity forms in the embryo, and the placenta and foetal tissues begin to develop. An embryo at this stage is called a blastocyst. If successful development continues in the uterus, the embryo hatches from the surrounding zona pellucida and implants into the lining of the uterus approximately six to 10 days after the egg retrieval. 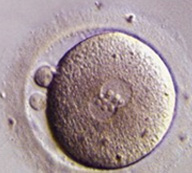 What happens during an IVF cycle?

A typical IVF self stimulation cycle (involving wife’s eggs) at Care IVF starts at day 2 of menstrual cycle. It follows the 4 basic stages:

What happens during stimulations?

The day two of menstrual cycle is usually the day 1 of stimulation. This is when we start giving the stimulation injections.

The husband needs to submit a fresh semen sample on the day of the pick up. The oocytes are retrieved by ovum pick up procedure (opu). The eggs are fertilized by IVF or ICSI within a few hours. Effectively the fertilization is done on the same day of the opu and this is considered day 0 of embryos.

IVF treatment cycle typically should not take more than 15 to 20 days. If you are wondering about how many days you may need to stay and how many times your husband has to visit the clinic please take a look at the IVF calendar below.

This is what a typical IVF calendar of a woman undergoing IVF self-treatment would look like.

Assisted Reproductive Technologies involve a significant physical, financial, and emotional commitment on the part of the couple. Psychological stress is common, and some couples describe the experience as an emotional roller coaster. The treatments are involved and costly. Patients have high expectations, yet failure is common in any given cycle. Couples may feel frustrated, angry, isolated, and resentful. At times, this feeling of frustration leads to depression and feelings of low self-esteem, especially in the immediate period following a failed ART attempt. The support of friends and family members is very important at this time. Couples are encouraged to consider psychological counselling as an additional means of support and stress management. We have a mental health professional on staff to help couples deal with the grief, tension, or anxieties associated with infertility and its treatment.

The IVF cycle will be cancelled if specific criteria occur:

When To End Treatment ?

Studies indicate that the chance for pregnancy in consecutive IVF cycles remains similar in up to four cycles. However, many other factors should be considered when determining the appropriate endpoint in therapy, including financial and psychological reserves. Members of the IVF team can help couples decide when to stop treatment and discuss other options such as egg and/or sperm donation or adoption, if appropriate. The physician, support groups, and other couples undergoing infertility treatment can provide valuable support and guidance.